Note: this is an excerpt from How to Write a Research Paper, Proposal, or Thesis eBook. Buy it now!

There are three main types of questions that a researcher can ask when writing a quantitative study. They are:

Causal Questions
Causal questions are exactly what they sound like – a question that tries to compare two or more phenomena and determine (or at least suggest) a relationship between the two (or more).

For example: “Does reading the How To Write A Research Paper eBook increase the average research paper grades in a class?” (The answer, of course, is yes. Everyone gets an A++).

Descriptive Questions
Once again, these are pretty much what you would expect them to be: descriptive research questions ask “how often?”, “how much?”, or “what is the change over time or in a different situation?” questions.

For example: “How often do college students need to use the bathroom during a test?” (Obviously the research site is implied here – at college).

Many times descriptive questions involve the degree or existence of relationship that exists between two or more variables. The script for a descriptive relationship question usually follows the below formula:
What is the relationship between ______________ (variable) and ____________ (variable) for _________________ (participants)?
For example: “How often do college students need to use the bathroom during a test as compared to during a normal class?”
Descriptive questions usually lead to further questions that your study was never meant to answer and it is a BIG MISTAKE to suggest so. In the example above one could deduce that if college students use the bathroom quite a bit more during tests that they may be cheating, or just more nervous, but you don’t know that! Don’t speculate until the very end and say exactly that: “This could mean may different things. However, more study is required to determine the reason(s).” The answer “why” is an entirely different study and almost always a qualitative one. 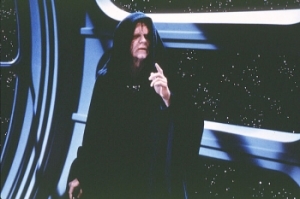 He predicted lots that he didn’t have empirical evidence for… we know how that turned out.

As a general suggestion, especially early on, stay away from predictive studies. They can be some of the most fun, but more often than not people get far too excited and overstep the bounds of their study. For example, in answering the above question, you come to the conclusion that yes, people with black and very dark brown hair always get higher grades in school. But unless you explore the ALL possible variables you can’t claim that. Maybe IQ changes someone’s genes and smarter people always have darker hair. Maybe due to the “dumb blonde” stereotype teachers always give preferential treatment to non-blondes. You just don’t know – be very careful in these types of studies. (Obviously the example was meant to be humorous, but you get the point).